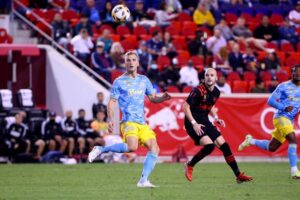 PREVIEW – Philadelphia Union and New York Red Bulls launch their playoff campaign Saturday in Chester, Pennsylvania. The pair have faced off three times already this season. Philadelphia proved the victor at home and took two draws away to make the match-up record 1-2-0 in Philadelphia’s favor. The all-time match up record also leans ever so slightly in Philadelphia’s direction, with twelve wins to New York’s eleven and eight draws between them.

When considering their seasonal record and final eastern conference standing as of decision day on November 7th, one might assume Philadelphia secures the win with relative ease. But matches between these times are always close. New York Red Bulls are in a strong run of form. And Philadelphia will need to draw energy from its home crowd and tap into their defensive reliabilities to prevail.

Philadelphia is strongest defensively but is developing in the attack

The defining grace of Philadelphia’s season performance is the reliability of their defending force and their record-setting goalkeeper Andre Blake. They’ll need to maintain that reliability defensively to fair well Saturday.  And they’ll need to carry forward recent momentum in their attacking ability from players like Kacper Przybylko and Jamiro Monteiro.

The Red Bulls, on the other hand, are heading to Philadelphia in strong run of form and with a confidence that they can take out the eastern conference’s number two seed. Despite scraping their way into the playoffs as the seventh seed, New York Red Bulls are 7-4-1 in their last twelve matches. They found a rhythm late in the season they intend to carry deep into the playoffs. And they come to Philadelphia to meet a familiar opponent who they’ve always held to a tight match despite any  result leaning the other way.

Both sides are strong defensively and top the conference in fewest goals conceded. Saturday’s match will be a low-scoring affair, with the victorious side almost assuredly only winning by a goal. The match will be aired on TUDN, Univision, PH17, MSG+ as well as on mlssoccer.com and on the app at 230 PM ET.