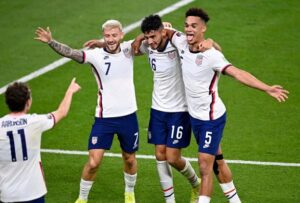 PREVIEW – The United States men’s national team continues its FIFA World Cup qualifying campaign on Sunday against Panama in Panama City. The USMNT is fresh off its first home win of the campaign after defeating Jamaica 2-0 at Q2 Stadium in Austin, Texas. Thanks to a draw between Mexico and Canada on Thursday, the United States has the top spot in the CONCACAF octagonal with 10 games to go.

USMNT on the pursuit for a little revenge

Manager Gregg Berhalter and his squad have a chance to continue their strong unbeaten run in 2021. The USMNT hasn’t lost a competitive game all calendar year with its last competitive loss in October 2019 to Canada. A result on Sunday in Panama City could get the United States to a 13-match unbeaten run in all competitions and the squad is riding high.

The emergence of Ricardo Pepi has been the story for the Americans with the 18-year old FC Dallas striker scoring both USMNT goals against Jamaica. Now, Pepi and company can get a little revenge on Panama, the nation that retroactively took the USA World Cup spot in 2018. Despite a home win against Panama in 2017, the Stars and Stripes drew Panama on the road in 2017 during the last qualifying campaign.

This will be the United States’ third road match of qualifying and only one in October. Its previous two road matches were a draw with El Salvador 0-0 and an emphatic 4-1 victory over Honduras. It next away match after Sunday will be Nov. 16 in Kingston against Jamaica.

Panama won’t back down

Los Canaleros has begun its World Cup qualification matches on the right foot with just one defeat in its first four. September was a particularly positive month for Panama with draws against Costa Rica and Mexico taking place on either end of a 3-0 win in Jamaica. October has started on the wrong foot for Panama with an upset loss to El Salvador on the road. The loss has Panama in fourth place in the eight-team CONCACAF group just one point behind third-place Canada.

The 68th ranked team in the FIFA World rankings is attempting to make its second consecutive World Cup but the odds are stacked against them with the improvements of the United States and Canada since 2017. Despite the lower odds, Panama has started off with strong performances and will have the home fans ready to make life difficult for the USMNT.